skip to main | skip to sidebar

As the dust settles from MoCCA...

... I received a bit of news that could only be filed under "Holy sh*t!": VIETNAMERICA was included in TIME Entertainment's recent Top 10 Graphic Memoirs list, which include personal favorites like 2006's FUNHOME and 2008's ALAN'S WAR. Thanks to them for this phenomenal honor to be included among all these amazing works that have inspired me and enriched my life.

As mentioned in the previous post, here's my badge artwork for this year's MoCCA Fest:

Knowing they would only print in black and worn by five types of guests—exhibitors, panelists, press, VIP's, and volunteers—I wanted to create something that was greater than the sum of its parts. Sadly, I don't think many wearers realized each was part of a bigger design and probably were just confused by the weird illustration shape on their respective badges.

The best thing I got during the show were these wonderful original artworks from Mike Roll and Kelly Tierney, fellow illustrators in the trenches who upon finding out I just had a girl, spontaneously made her these adorable gifts! 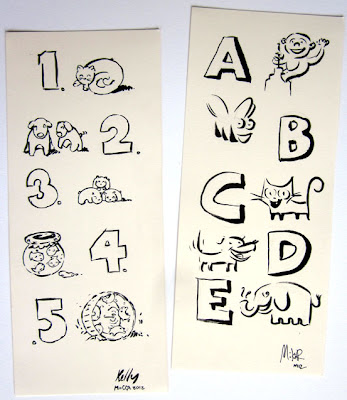 Leading up to MoCCA, I did a VIETNAMERICA talk and gathered some cartoonist friends for a chat at the A/P/A institute: 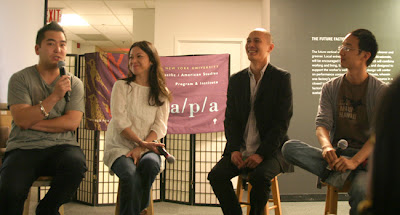 Thanks to everyone who joined Jerry Ma, Christine Norrie, myself, and Fred Chao for a fun evening!  Alright, enough pics for now. My new studio mate is ordering me to get back to work: 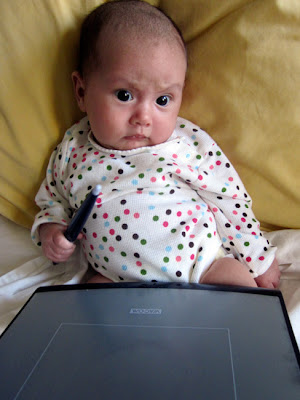 love the badges. the studio mate is okay too.

Meh... she's alright. Keeps using my Cintiq as her diaper changing pad, though.

Ha... I can't wait till she learns how to do tech packs! Where else to find me online: